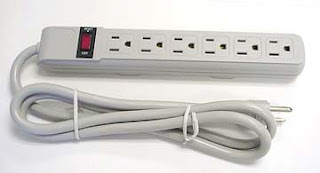 The author/editor has worked in a number of architectural design firms over the years, and he has noticed a strange anomaly. Many highly-paid design professionals are oblivious to some clearly nonergonomic aspects of their own working environment. The inconveniences are staring them straight in the face, but they just aren't seeing them.

Let me make make clear that this observation is nothing profound. On the contrary, the "design change" I'm prescribing is laughably mundane and costs nothing to implement. That makes widespread failure to implement it all the more inexplicable.

See the ordinary power strip in the illustration? No, I'm not about to criticize it for ergonomic defects. It's just your average inexpensive surge protected power strip, no better or worse than a dozen other similar products on the market. The question I want to ask is "Where have all the experienced design professionals I mentioned installed this product in their own offices?"

Ninety-nine out of a hundred have plopped their power strips on the floor beneath their desks, right beside the wall outlet, and each time they have to plug or unplug a device, they must crawl under their desks among the dustballs, getting their knees and palms covered with grit in the process.

To which one can only wonder, "Why?" After all, the typical power strip comes with a power cord several feet long, more than long enough to reach from the outlet to the average desktop. Why didn't they position their powerstrip on top of their desks, run the solitary cord down through the hole in their desktop to the wall outlet, then while seated in a comfortable, upright position, plug their electrical devices into this far more convenient row of outlets? Not only does this make it easier to plug and unplug devices when needed, it makes it much easier to shut off all the devices in a single motion by using the power strip's built-in power switch.

Why instead did they laboriously thread a half dozen power cords down through the same hole, until it was so clogged with wires any additional plugs would no longer fit through the opening?

The answer is: they were all trapped in a conceptual box of their own making. All these talented architects and designers subconsciously equated their power strips with those little cube taps which turn a single outlet into three, or four. As a result they locked themselves into the totally unwarranted assumption that wherever their wall outlets were located, that's where their power strip had to be.

Am I making a mountain out of a molehill? Many will think so. But no conscientious architect, interior designer, or industrial designer can dismiss my example as irrelevant. I bring this all up not to snipe at my esteemed colleagues, but to underscore a couple of sobering facts: one, even experienced design professionals whose responsibility it is to make our built environment as user friendly as possible, can miss the boat, and two, it is not as easy as we imagine to "think outside the box". First we have know we're in a box.