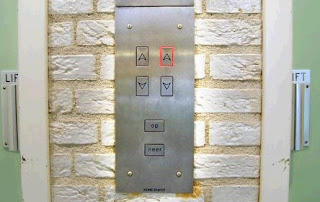 This is the control panel of the lift (elevator) in our department. The first time you order a lift you'll definitely push on one of the top arrows. However, these arrows only indicate whether the lift is moving and in what direction. To order a lift you must use one of the lower buttons with the text "op" (up) or "neer" (down). Indicators and controls have exactly the same appearance here.

Mention the word "ergonomic" and what comes to mind? If you're like most people, you immediately think of the countless "ergonomic" mice that "fit the hand" or "ergonomic" keyboards that look like they were sawed down the middle then glued back together at an angle. But in fact much of what makes an industrial product ergonomic or nonergonomic has little to do with what it feels like, and a lot to do with what it looks like.

The most misleading aspect of the look is of course the articulated grooves surrounding the arrow symbols. These grooves make the flush-mounted indicator lights look like control buttons that can be actuated by pushing on them.

A second possibly overlooked factor is graphic symbols are far more powerful than written text. Arrow symbols which POINT up or down speak louder than strings of text which spell out "up" or "down". Exceptions to this rule might be Egyptian hieroglyphs and Chinese pictograms, which are essentially ancient versions of internet browser icons.

Door access control systems are used to grant authorization to persons/vehicles, thereby providing restricted access in and out of a concerned place. These systems are
highly advantageous compared to the conventional locking and monitoring systems.