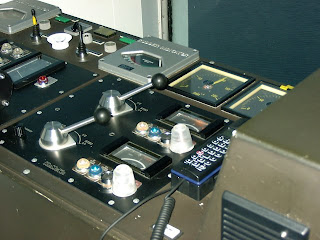 This picture was taken on the bridge of a Danish vessel. Visible are: two control levers, two meters, 2 times two indicator lights (yellow and blue) and 2 times two control buttons (black and red). Notice how the red buttons have been covered with tiny plastic cups usually used to dispense liquid medicine?

Pushing a black button permits the officer on watch to assume control of the ship's thrusters. Pushing a red button on the other hand initiates a full emergency stop. The only difference between the two buttons with radically different functions, is their color. When an officer on watch uses the thrusters alongside a quay, he must turn his back to the control panel and look out the front window. Needless to say it is very difficult to distinguish the color of the buttons with ones back to the panel. Incidents have occurred in which the officer on watch inadvertently pressed the wrong button causing a full emergency stop just when he needed power from the thrusters. To prevent this potentially catastrophic mistake from happening again, the crew placed cups over the emergency stop buttons.

In "Nonergonomic!: City Bus Door Controls" this editor cited an example of nonergonomic design that has caused bus drivers on Taiwan no little frustration, and which could conceivably lead to passenger injuries. It is not hard to imagine a passenger getting caught in one door because the driver momentarily became confused and thought he was closing the other door. But the downside risks of the bus door control defect pale next to this example.