Bad Designs: This is a Mop Sink 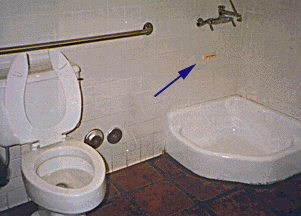 Bad Designs: This is a Mop Sink

This is a Mop Sink

This picture is from a restaurant in Santa Barbara. The men's restroom contains no urinal. The fixture in the corner affords a certain activity. To try to discourage this activity someone taped a small sign to the wall above the fixture. The sign says "This is a mop sink."

The mop sink looks enough like a urinal to use it as one. When simple things have signs, especially homemade signs, it is usually a signal that they aren't well-designed.

In his landmark 1966 ideological manifesto, "Complexity and Contradiction in Architecture", architect and critic Robert Venturi ridiculed First and Second Generation Modernists for striving to make modern buildings communicate their inner functions entirely through their external forms, without recourse to symbols. Venturi insisted it was often far more reasonable to construct a simple container, i.e., a box, and to make no pretense about the fact that one was merely applying superficial decorations to the box after the fact. Not only was it economically more practical, it was philosophically more honest. Venturi had a point. It surely makes more sense to construct a neutral rectangular box and to tack an enormous illuminated plastic "Costco" sign on the front, than to resculpt the entire box at enormous expense, even distorting its structural system, merely to "express its function". Many modernists, second generation modernists in particular, committed serious errors quixotically striving after "functional expressionism". The above example however represents an exception. Here Venturi was wrong. Sometimes architectonic forms scream louder than signs. Sometimes the architect had better get the forms to tell users what's going on in no uncertain terms, because signs just aren't going to cut it.