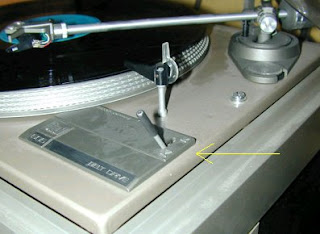 When the user of this poorly designed turntable lowers the tonearm control lever, tilting it down toward himself, the tonearm does exactly the opposite of what he has a right to expect, it rises up off the surface of the record!

I have no doubt that the designer of this turntable was earnestly attempting to solve a difficult mechanical engineering problem to the best of his ability, and not indulging in mere product styling. I am sure he worked late into the night working out the complex geometry of the control lever linkage to the tonearm. Unfortunately he neglected the most important consideration of all. Mechanical engineering solutions are meant to be used by human beings, and human beings use mechanical devices certain ways and not others based on long experience with the world around them. It is not reasonable to expect human users to abruptly forsake these hard-won and usually correct instincts. Rather it is the responsibility of architects, urban planners, interior designers, and industrial designers to make sure the man-made environment conforms to the requirements of human physiology and psychology.