From Wedgies to Bents 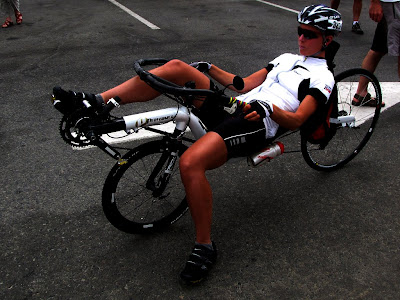 From Wedgies to Bents
by Bevin Chu
Taipei, China
January 27, 2011

What drove me to such a drastic decision?

It's a shame, really. Under different circumstances, such a decision would not have been necessary.

The fact is I rode conventional diamond frame bikes most of my life, with nary a mishap. I never took any spills because I was riding on First World street surfaces, in major cities such as Washington, DC, Houston, New York, and Los Angeles.

Neither of the two spills I took recently had anything to do with riding skill. In neither case did I "lose my balance." Yes, I am considerably older than I was in junior high school. Yes, I have slowed down quite a bit, thank you very much. But I can still track stand until the light turns green with no problem.

No, the spills were caused not by pilot error, but by Taiwan's woefully substandard street surfaces.

Both times I was riding in a straight line at walking speed. Both times the front tire skidded sideways and dropped me on the pavement in a split second. Far too fast to react.

The first spill was caused by an abnormally low "curb" only two centimeters high. My front tire glanced against this nearly invisible "curb" and abruptly skidded sideways. A split second later I was down. I fell on my right side and injured my right knee and right elbow. My right elbow swelled up grotesquely, necessitating three months of physical therapy.

This spill was followed by a second spill, less than half a year later. The second spill, which occurred only two weeks ago, was caused by glazed ceramic tiles on the sidewalk. My front wheel rolled onto the icy slick tiles, and immediately slipped sideways. A split second later, I was down. This time I fell on my left side and injured my left knee and left shoulder. This time my injuries were even more severe. My left knee swelled up to the size of a cantaloupe. X rays of my left scapula show a wavy horizontal line that is probably a fracture. The doctors are uncertain. The injuries will necessitate an even longer period of physical therapy. 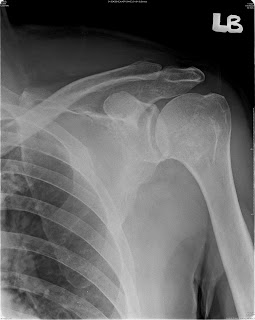 The second spill was for me, the final straw.

Diamond Frames: Not for Tall People

The conventional diamond frame bike design has an intrinsic defect: It is unsuitable for tall cyclists.

The conventional diamond frame bike positions the cyclist above the pedals. This means that a tall cyclist is forced to sit at a stratospheric height above the pedals. The tall cyclist may fall as much as two meters before impacting the unyielding street surface below. The damage inflicted to the tall cyclist's bones, ligaments, tendons, and muscles by a fall from that height, is not hard to imagine. As the saying goes, the bigger they are, the harder they fall. 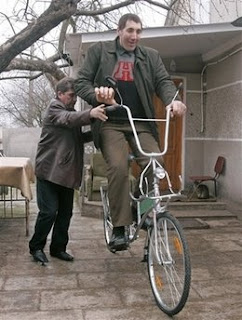 The World's Tallest Man on a Conventional Diamond Frame Bicycle 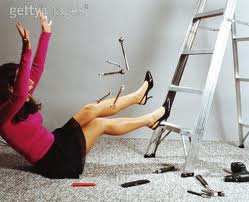 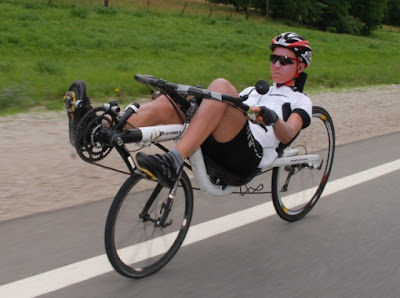 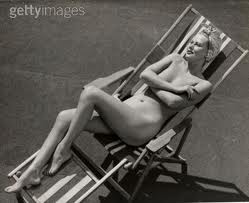 Yesterday, penny farthings were viewed as "normal" bicycles. Diamond frame bicycles, a novelty, were known as "safety bicycles" because they allowed the cyclist to sit closer to the ground. 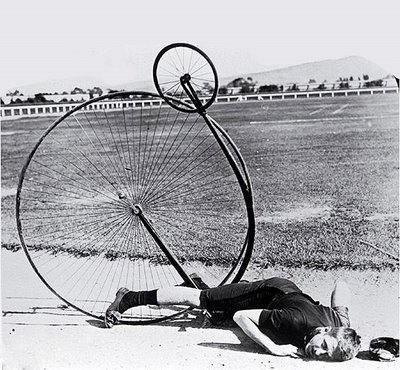 Fall from a Penny Farthing 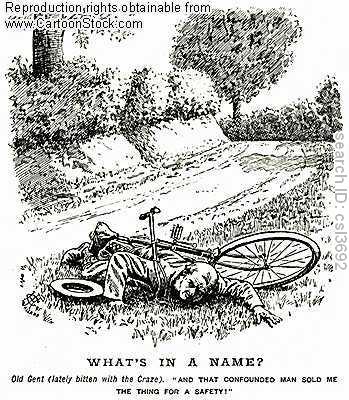 Fall from a "Safety Bicycle" or Diamond Frame

Caption: WHAT'S IN A NAME? Old Gent (lately bitten with the Craze). "And that confounded man sold me the thing for a safety!"

Tomorrow, will recumbents be viewed as "normal" bicycles? Will diamond frames be viewed as quaint relics of the past, alongside penny farthings? Stranger things have happened. 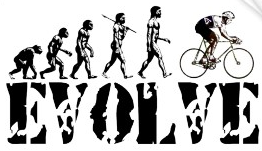 Evolution according to Wedgie Advocates 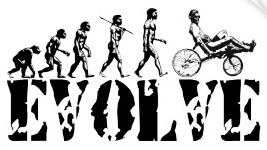 Evolution According to Bent Advocates

Speaking for myself, the answer is clear. I was once unfamiliar with recumbents. I had no idea what they were. But once they caught my attention, I had to find out.

So I researched them. I compared them to conventional diamond frames, point by point. It was soon  clear that next to the recumbent, the diamond frame was a hopelessly outdated design configuration.

The Bent: A Better Design that is Paradoxically Easier to Build

The frame of a SWB recumbent is the essence of simplicity. It is hard to imagine anything simpler. It is nothing more than a single tube with three bends. A hole near one end forms the head tube. A split at the other end forms the chain stays. The result is a conceptually elegant, technically sophisticated design safer, more ergonomic, and more aerodynamic than any diamond frame one can imagine.

Frame of a SWB Recumbent

The frame of a conventional diamond frame upright, by contrast, is a complex assembly consisting of eight separate tubes that must be precisely held in place and laboriously joined together. The result is technically obsolete, less safe than a recumbent, and is the antithesis of ergonomic comfort and aerodynamic efficiency. 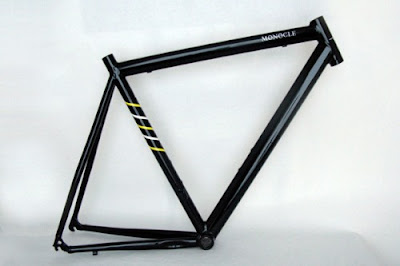 On the other hand, conceptually speaking, the recumbent bike is merely a conventional diamond frame bike rotated 90 degrees.

With the bottom bracket (bb) as rotational center, rotate it 90 degrees clockwise, like this:

And you have a bent!

Therefore much of the emotional resistance to bents is really unnecessary.

My Diamond Frame Past

When I was in junior high, my dad bought me my first bike, a discount store "English Racer" with upright handlebars, full metal fenders, three speed Sturmey Archer gears, and dual handbrakes.

In senior high I bought a discount store 10 speed with downtube shifters and centerpull brakes.

A year before graduating from college I bought a Peugeot PX 10.

A decade later I bought a Pinarello 10 speed with Campy derailleurs, downtube shifters, and centerpull brakes.

Three years ago I bought an entry level Giant urban commuter. I deliberately chose a cheap bike so I wouldn't have to worry about theft.

Woefully substandard street surfaces are one thing. Defects inherent in the conventional diamond frame design are another.

But after moving to Taiwan, the woefully substandard street surfaces here have made this defect in the diamond frame design a very real issue. For this 187 cm (6'-1 1/2") cyclist at least, the two add up to an unacceptable combination.

And since it is considerably easier for the Average Joe to switch bicycles than to persuade City Hall to repave the streets, the solution is clear. Stop riding wedgies, and start riding bents.

I have now decided to sell my diamond frame urban commuter and buy a low racer recumbent.

I will probably buy the Performer Low Racer Caliper, a reasonably priced but high quality short wheelbase low racer made by Performer, a Taiwan based bike manufacturer. It is not the lightest low racer made, but at 11.9 kg (26 lbs) it is light enough. And I can always opt for the carbon fiber seat option to reduce the weight even more.

I looked at the highly praised Dutch low racers as well. Challenge, M5, Optima, Velokraft. But the prices were pretty high, several thousand Euros, more than I could justify spending. One bike, the Raptobike Low Racer, was very reasonably priced at 1100 Euros. But even though it was OEM'd over here, I would still have to pay a hefty import duty. This struck me as one of those times when it really does make more sense to shop locally. 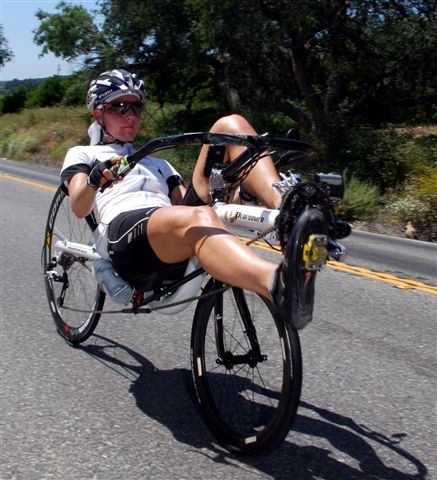 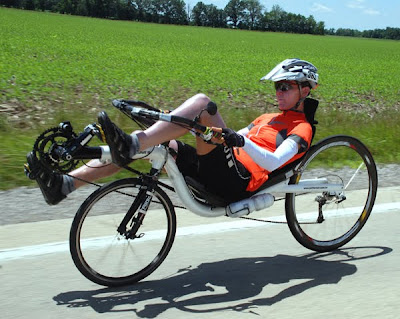 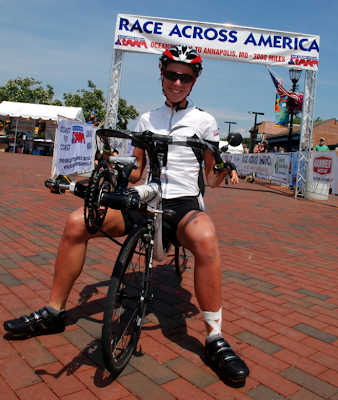 Barbara Buatois on her factory modified Performer Low Racer. Notice the open cockpit with Superman handlebars instead of the stock praying mantis handlebars 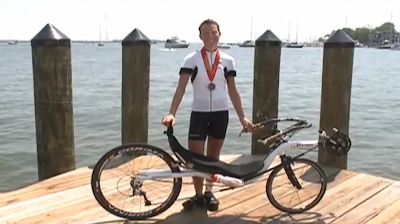 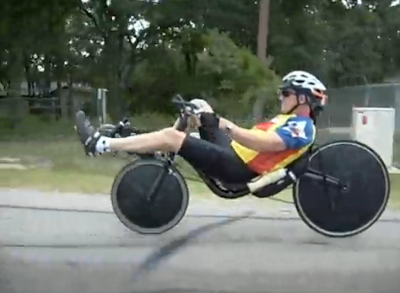 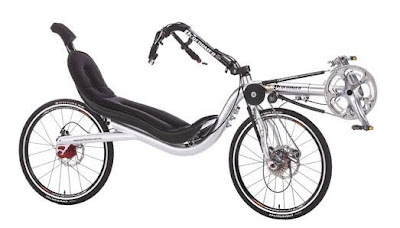 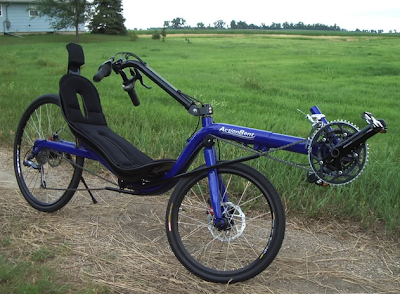 Are Low Racers "Too Low To Be Seen?"

I take exception to the claim that low racers are "too low to be seen," and that riders of low racers have only themselves to blame if the driver of an SUV runs them down.

I'm talking of course about "conventional" low racers with seats approximately 36 cm off the ground, and not the ultralow one of a kind machines used to set speed records. Those have seats only a few centimeters off the ground.

The driver of an SUV can hardly argue that drivers of low slung sports cars, users of wheelchairs, and children on diamond frame child bikes "were too low to be seen," that they "took their lives in their own hands," and wash his hands of responsibility for running them down.

The notion that the road belongs to automobile drivers alone, and that other road users are merely nuisances who ought to get out of their way, must go. Slow moving vehicles such as bikes must never be ridden on limited access superhighways. But all taxpayers have the right to use a nation's surface roads.
Posted by Bevin Chu at 8:12 AM 2 comments: