Artists reckon that the "Golden Ratio", also called the "Golden Section Phi" and nature's most astonishing number, is the ratio that controls the proportions of all beautiful objects, writes Assem Deif*

Historians trace the Golden Ratio back to Euclid, yet even before him it was governing the dimensions of monuments in ancient Egypt. The most pronounced of these is the Great Pyramid. The Great Pyramid is not the only structure from ancient Egypt that complies with constants like Pi or Phi; the Egyptians used the Golden Ratio in many ways both in the architecture of their temples and in their drawings. So whereas, the discovery of the "golden rule" was generally credited to the Greeks, the findings of such Egyptologists as De Lubicz and Fliders Petrie produced irrefutable proof that the Egyptians had a mathematical understanding of these constants, the ratios, not the symbol, 1000 years earlier.

Greek scholars were visiting Egypt even before the Mouseion was founded, including Thales, Socrates, Plato and Aristotle, and Pythagoras, who spent 22 years in Egypt and announced his theory only after leaving. Egyptians were aware of the triangle 3:4:5 which Pythagoras himself called the "Holy Triangle". Eight pyramids from the fourth and fifth dynasties have their inner triangle conforming to these ratios. 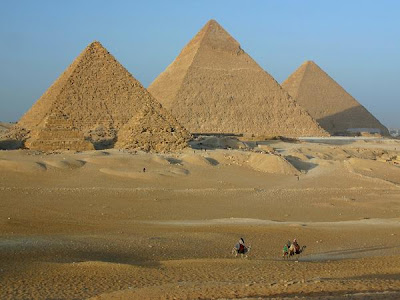 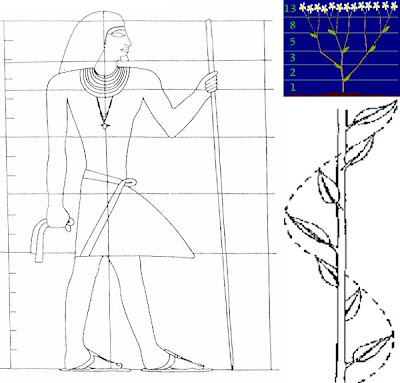 leaf arrangements around a stem and plant branching in a fibonacci formation;