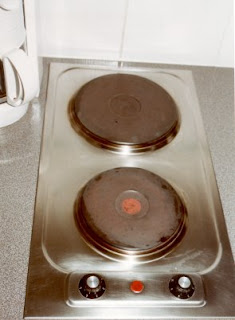 On our holiday in the Alps we found this classical example in our rented house. Apparently they still exist, absolutely no clue is given which knob operates which heater. And only one light indicates that either heater is switched on.

My wife knew that as we read from left to right and from top down, the left hand knob had to operate the top heater, which was correct, but we frequently made a mistake. The best solution is to have the knobs arranged the same way the heaters are, two knobs below each other. If this is not possible for whatever reason, two indicators would be useful:

Although you could add a red surface on the right hand knob as to indicate that this one operates the heater with the red circle, you have to be aware that that circle becomes invisible as soon as you put a pan on it. Therefore, the cheapest solution is an engraved line to the heater.

This set of stove controls represents essentially the same design problem cited in "Nonergonomic!: City Bus Door Controls". The problem here, as there, is the failure to clearly "map" control switches to the devices they control, be they bus doors or heating elements. Instead of being arrayed alongside and parallel to the heating elements, the control knobs have been relocated to the end of the stove, perpendicular to the heating elements.

This decision does not appear to have been arbitary. It was probably motivated by an entirely reasonable desire to position the controls close to the front of the kitchen counter. Nevertheless it was a mistake. The predictable result has been the loss of natural mapping, and the introduction of ambiguity, uncertainty and confusion. Imagine the cumulative frustration experienced by everyone who has ever had occasion to use this stove. Now multiply that by the number of units sold. I think you will agree that more alternatives should have been explored.