Bad Designs: How Do You Turn On the Shower? Example 2 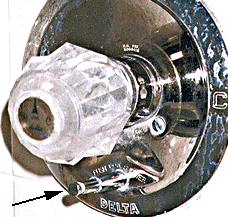 Bad Designs: How Do You Turn On the Shower? Example 2

Products should be easy to use. As a fundamental principle products of any kind should work without having to wrack your brains figuring them out. They should be easy to make work, and hard to make fail. A product which meets this admittedly demanding criterion qualifies as a well-designed product. This applies not only to hardware; it applies to software as well. Some software exhibits the same "three ways to fail, one way to succeed" characteristic. It seems to have been written by computer programmers for other computer programmers, with the implicit attitude "If you can't figure it out, you're too stupid to be using a PC."

The truth is just the opposite. If first time visitors approaching a building can't tell which direction the lobby doors swing and which direction they're supposed to proceed to find the reception desk just by looking, then the architectural designer has failed, not the visitor. See "Bad Designs: Trapped between the Doors!" If first time software users can't install an operating system or an application straight out of the box and have it work at least passibly just by accepting the defaults, then the author of the software has failed, not the user.

The overwhelming majority of PC owners are not software engineers. That does not mean they are stupid. The overwhelming majority of PC owners' expertise lies elsewhere. If a computer programmer insists on treating PC owners who are not IT experts with contempt, he merely betrays his own lack of professionalism. He merely confesses an inability to perform his own job, which is to author programs that enable other specialists to perform their tasks more efficiently without diverting valuable time and energy configuring unfriendly software.