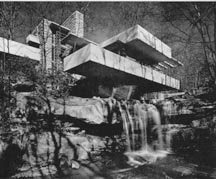 Feng shui (pronounced FUNG SHWAY) isn't an obscure ancient art any more. It's not even a wacky New Age fad. Ever since Donald Trump called upon feng shui consultants, even the most traditional Westerners are buying into the idea that the design of buildings can affect our fates.

The words feng shui mean wind/water. Feng shui designers believe that buildings should allow for a positive flow of energy (or chi). To achieve this, some feng shui practitioners use a compass and other tools to make precise measurements of walls, windows, and doors. Some practitioners follow more general guidelines. Some rely mainly on intuition.

Let's look at what one feng shui consultant, Master Xu Weili, has to say about the classic Frank Lloyd Wright home, Fallingwater.

According to Xu Weili....

With Fallingwater, Frank Lloyd Wright accomplished the traditional Taoist objectives of meeting wind with water, or what the Chinese describe as feng shui.

Simply said, feng shui means living in balance with nature. Fallingwater represents this ideal. For the first time, an American architect understood Chinese geomancy, and put this to work in his own way. Residents of Fallingwater could dip their toes in the waters, or breath in the clean air of a pure Pennsylvania forest. The cantilevered terraces of Fallingwater recall the great homes of Egypt and Babylon, with secret waters flowing, and secret gardens flowering.

Small wonder that the original family of Fallingwater was blessed with financial offerings.

Frank Lloyd Wright was America's greatest architect. One is tempted to stick one's neck out and claim that Frank Lloyd Wright was the greatest architect who ever lived, bar none. Wright certainly made that claim about himself often enough. It might have been an exaggeration, but not by much. He referred to his attitude as "honest arrogance" which he said was to be preferred to "servile humility". Whether those are the only two choices open to an artist is questionable. What is not questionable is Wright's accomplishments. Wright's lifetime achievements, equal to that of a dozen of his peers, were staggering, and made even more staggering due to the fact that he remained so prolific so late into his life.

But how many architectural historians in the West appreciate the enormous artistic debt this great American genius owed to traditional Chinese architecture? I for one have long held that Frank Lloyd Wright owed far more to Chinese architectural tradition than has been properly acknowledged. Frank Lloyd Wright openly professed a profound admiration for the ancient Chinese philospher Laozi, whose Dao De Jing he quoted repeatedly, to the blinking incomprehension of many linear-minded western academics. Laozi was a Daoist, and Feng Shui is a Daoist art form. Wright routinely linked his decidedly un-Western understanding of "empty space as a positive attribute" to this Chinese mystical philosophy. Wright did not practice Feng Shui formally, but he did practice it in spirit, and with knowledge aforethought of Daoist precepts.

It is hard to avoid the uncomfortable feeling that a certain "cultural chauvinism" lies at the core of this persistent failure to and to set the historical record straight by acknowledging Frank Lloyd Wright's "Chinese Connection". One can only hope this flagrant injustice will eventually be remedied sometime in the future.

Post Script: Prominent architectural critics such as Vincent Scully have of course noted the "Japanese Connection". But neither Scully nor any other western architectural historian or critic I know of has ever followed up by tracing Wright's stylistic borrowings back to their intellectual and artistic source -- China. Do they really not understand that traditional Japanese architecture is perhaps 80% Chinese? (The remaining 20% is indigenous Japanese variations on Chinese archetypes.)

In certain respects Japan bears a relationship to China akin to the relationship Rome bore to Greece. Just as much of Roman culture was borrowed wholesale from Greece, so much of Japanese culture was borrowed wholesale from China, and indirectly from China through Korea. Just as the Greek goddess Aphrodite became the Roman goddess Venus, so Chinese Buddhism, aka Tsan, became the Japanese Zen. Most of this occurred during the Tang Dynasty (roughly 600 to 900 AD) when Japanese envoys made wave after wave of pilgrimages to China, and with the official permission of the Chinese Imperial Court, copied every aspect of Chinese civilization and carted it back to Japan. Even today, a millennium and a half later, perhaps half of the written Japanese language is still recognizable by Chinese who speak no Japanese.