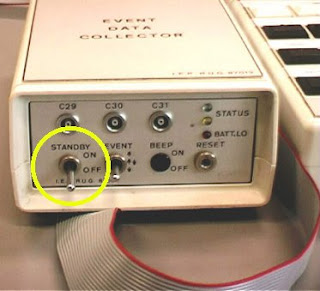 This portable Event Data Collector monitors heart rates for workers on-the-job. Technically it's a perfect device. In terms of human factors however, it's not. A design error confuses users. To save on batteries, the device may be set to Stand-by mode. One normally expects such a button to switch between "On" and "Stand-by". Here however, the button (in the yellow circle) switches between Stand-by "On" and Stand-by "Off". One really has to think about it: Stand-by "Off" means the device is registering data, so it equals "On". Stand-by "On" meanwhile, means "Stand-by". Logical, but not ergonomically correct.

Too often one is confronted with nonergonomic design that would not have cost a penny more to do right -- if only the designer had "cleared the decks" before embarking on the design process. Blunders such as these are the most galling of all.

What went wrong? We can't know of course, but we can make a pretty good guess. Insofar as it reveals the thought process of its creator, the panel layout is almost an archeological artifact, like the famous cave paintings at Lascaux. It is obvious the designer was sorting out his thoughts as he went along. First he asked himself, "What are its functions?" He then ran down his mental list: Standby, Event, Beep, Reset. Then he said to himself, "Okay, I've got the functions labeled. Now for the settings. For Standby, On and Off... for Beep, On and Off... " and so on.

The problem of course is that end users don't relate to the controls this way. End users have their hands full with just two questions: One, "What does this thing do?" and two, "How do I make it work?" End users want the bottom line. They want ON and STANDBY. They want ON to mean it's working, and STANDBY to mean it's ready to work. Actually, to be perfectly honest, they might not even want that. They might be perfectly happy with plain old ON and OFF. They don't have to know that OFF is actually STANDBY. That can be explained in the instruction booklet if necessary. They sure as hell don't want to have to sort through the product designer's bewildering double negatives, in which ON means OFF and OFF means ON.

One of the biggest challenges for designers of all kinds, is to avoid such blunders by figuratively "pushing the reset button" in ones' mind. This applies to everyone -- from the urban designer who planned the neighborhood, to the architect who designed the individual building, to the furniture designer who designed the table, to the product designer who designed the "Event Data Collector" sitting on the table before us. All designers must learn to start with a clean slate before embarking on new design projects. Unexamined assumptions must go straight out the window, because "when you assume," as the old joke goes, "you make an ass out of you and me."