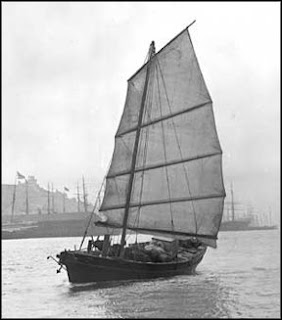 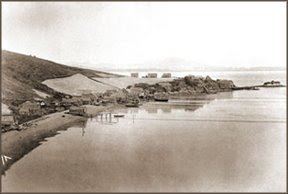 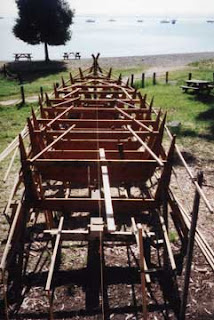 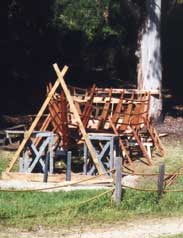 These single-mast vessels, ranging from 30 to 50 feet in length, were built almost entirely of local redwood. The long and narrow junks plied the waters of the shallower regions of the Bay Area from circa 1860 to 1910. The fishermen worked large triangular nets staked to mudflats, and brought their catch of shrimp ashore to small fishing villages. The shrimp was boiled, dried and processed for shipment to Hawaii and Asia.

Working from historic photographs, oral histories, and archaeological information, the largely volunteer crew, led by San Francisco Maritime NHP curator and boatbuilder John Muir, is reconstructing a forty-two foot junk. The junk is being built outdoors at the site of one of the largest of the Chinese Shrimp fishing villages: China Camp State Park, in San Rafael, California.

The completed junk will be launched at China Camp State Park in the Fall of 2003, and will then become a working sailing museum vessel on exhibit to the public and available for special historic events around the Bay Area. The junk will share exhibit time between the historic Chinese village site at China Camp State Park and the Hyde St. Pier boat exhibit basin at San Francisco Maritime National Historical Park in San Francisco.

The San Francisco Bay Shrimp Junk Project is a worthwhile project that will, hopefully, enhance public awareness and appreciation of Chinese contributions to ship building technology. These contributions are not limited to dusty history books and museum glass cases. As previous articles I have posted prove, they remain highly relevant even today.