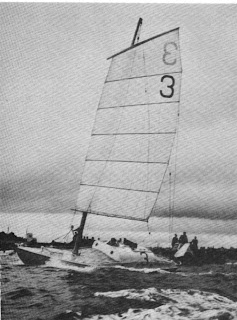 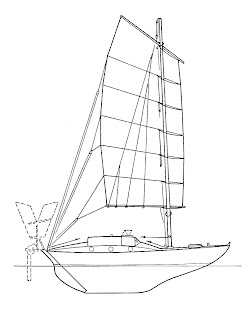 The Ship Would Not Travel Due West

From the late 1800s until the 1960s, the development of the modern sailing yacht was an evolutionary process, occasionally interrupted by a flash of insight. Racing and cruising yachts were little more than refinements of the last sail-driven fishing schooners. In the first half of the 20th century , measurement rules and conservative owners were slow to accept the Bermudian rig or the fin keel, despite their proven efficiency. That conservative attitude finally began to change forty years ago when five daring pioneers set out from the southwest of England on an adventure that would forever change the face of yachting.

In June, 1960, with no fanfare, five sailors left Millbay Docks, Plymouth to race across the North Atlantic in the first Singlehanded Trans-Atlantic Race. At that time, the voyage they were embarking on was viewed by many in the yachting community as not just challenging, but practically impossible. The gale-swept ocean with its prevailing westerly winds was seen as an overwhelming force that no small yacht could prevail against for 3,000 miles, let alone a singlehander.

Most of the technologies we take for granted had yet to marketed. Dacron had just been introduced, wood was still the accepted material for hulls and spars and gentlemen sailed to windward as little as possible. A 25 footer like the Folkboat (with 4'-8" of headroom) was universally considered the ideal size for a solo ocean crossing, although this itself was viewed as a somewhat eccentric pursuit. Self-steering was a matter of lashing the tiller and hoping for the best, so solo ocean racing was simply inconceivable, a pipedream that would result in disaster and bring disrepute on the whole yachting community.

If the critics had made the effort to learn anything about the two men who were behind the race, they might have realized that this was no publicity stunt. H.G. "Blondie" Hasler and Francis Chichester knew exactly what they were getting into. When all five entrants completed the course, conventional wisdom on sailing and seamanship had been turned on its head, and the sport had entered a new era. Within a few years, Hasler's self-steering and junk rig would become an accepted part of the cruising scene, and thanks to Chichester, sponsored record breaking and radio reports would bring the adventure to the homes of millions.

Lt.Colonel H.G. Hasler DSO, MBE began his adventures on the water not in a yacht but in a kayak during World War II. In December 1942, he led a ten-man team of Royal Marines in a daring attack on the occupied harbor of Bordeaux in western France. They launched five folding kayaks at the mouth of the Gironde from the deck of submarine and paddled 75 miles upriver under cover of night. Only two kayaks reached their goal, a loading dock, where they attached limpet mines to four German merchant ships. When the charges went off, the ships sank at the dock, blocking access for many months.

The Germans might never have found out how this bold attack had been carried out, but the British submarine was unable to remain in the area to pick up the marines, so they were forced to find their own way across occupied France. Eight of them were never seen again. Hasler was the only one who spoke French and he and a Private named Billy Sparks managed to return to Britain via Spain with the help of the Resistance. Although still in uniform, the other eight men were shot as spies on direct orders from Berlin. (This cowardly act was later mentioned at the Nuremberg trials and is said to have ended the "gentleman!|s agreement" between the English and German high commands.)

These gallant men became familiar to everyone in post-war Britain as the "Cockleshell Heroes," the name of a book and a film about the raid. After the war ended, Hasler took up sailing, first in Petula, his gaff yawl built by William Fife in 1899. His innate curiosity then led him in a completely different direction, and he purchased a Thirty Square Meter named Tre Sang. Although it was designed for racing in sheltered waters in Scandinavia, Hasler entered the boat in some RORC races in the late 1940s and proved this low, light needle of a hull was capable of fast passages in the right conditions.

To test more radical ideas, he had another Scandinavian design, the Folkboat, built in the early 1950s. He had to patiently explain to the builders that he didn't want any form of cockpit. The whole boat was to be decked over, with just two small circular hatches in the cabin top. This was to be his floating laboratory and he called it Jester "because it was such a bloody joke." Perhaps because of wartime experience, Hasler was no dilletante, he was totally committed to making his ideas work. So unlike most nautical inventors, he rejected anything that wasn't absolutely seaworthy.

In the following years, he cruised around the Channel with different kinds of self-steering vanes on the Jester's stern and an unstayed wooden mast carrying variations on the Ljungstrom (lapwing) rig. This consisted of twin Bermudian mainsails set on a single luff. While closehauled, the two sails acted as one, but downwind the twin booms were goosewinged out giving port and starboard mainsails.

The idea showed promise and Hasler spent a couple of seasons thinking he had a workable, offshore system. But he reluctantly concluded that the risk of the booms flying out of control in strong winds was too great, and there were also two mainsails to reef. The Jester was living up to its name. He ditched the project and adopted an even more obscure rig, the Chinese junk sail.

Hasler soon proved to himself that the Chinese rig was a marvel of engineering. The fully-battened lugsail could be raised, lowered or reefed in any weather without leaving his circular main hatch, which was protected in bad weather by a small pram hood. He knew instinctively that his search was at an end; he had found a rig that could stand up to his ultimate test; solo passage across the North Atlantic without leaving the cabin. Thus began the modern junk rig movement!

With the rig questioned solved, he now was free to tinker with his self-steering vane and dream of his next goal. "It seemed that a race is always the best inducement for developing anything, and if I was to get people aiming at ease of handling and comfort, it would have to be a demanding race," he recalled in later years. "Going to windward across the North Atlantic seemed the most demanding thing to do!"

He defined the prospective race as follows: "A sporting event to encourage the development of boats, gear, supplies and technique for single-handed passages under sail." There was a dramatic lack of rules: no handicaps, no compulsory equipment, no marks to round. When asked about safety and the need to carry a radio transmitter, Hasler merely replied "It would be more seemly to drown like a gentleman."

Lt.Colonel H.G. "Blondie" Hasler of the Royal Marines was a determined man. His audacious scheme to paddle kayaks 75 miles up the Gironde to plant limpet mines on German shipping anchored in Bordeaux proved that. But Hasler was an eminently practical man as well. His practicality was fully consistent with his determination. In order to successfully sail across the Atlantic, the second widest ocean on the planet, and to do it windward, "the hard way," Hasler knew he needed every advantage he could get. Not surprisingly Hasler chose the Chinese junk rig, the most ergonomic sail configuration ever designed.